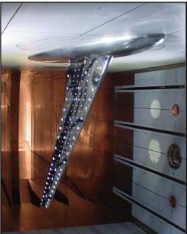 An interesting paper involving the use of RBF Morph has been presented at the International Forum on Aeroelasticity & Structural Dynamics 2013 in Bristol UK.

The paper “Collaborative HIRENASD analyses to eliminate variations in computational results” is available in the download area of this site or using a direct link.

The AePW took place in 2012 and the HIRENASD wind-tunnel model was tested in the European Transonic Windtunnel in 2006 by Aachen University0s Department of Mechanics with funding from the German Research Foundation.

The results are obtained at Mach 0.8 for a Reynolds number of 7 million based on chord at three levels of grid refinement and include aerodynamic coefficients and coefficient of pressure obtained for steady-state or static aeroelastic equilibrium and for unsteady ow due to modally-excited wing.

Both, the coefficient of pressure and the frequency response functions, are compared against the AePW computational database and the experimental data.

The common-grid analyses approach with the same turbulence model and the same post-processing methods brings the computational results obtained by four solvers closer together when compared to the AePW database.

However, this approach does not bring the computational results closer to the experimental data.