Structural optimization is a method commonly employed by designers to realize better products as soon as possible. In the present work the aim is to arrange the material distribution of a structure in order to get the minimum weight and to prevent the risk of mechanical failure during its functioning. There are several ways to accomplish the structural optimization task. Topology optimization allows to reduce the mass of a component subjected to specific loads and constraints, by removing material from a defined design space

In this paper a novel approach to handle the structural design and automate the shape optimization of an automotive wheel rim in the ANSYS Workbench environment is proposed. The aim of the study is to optimize an aluminium wheel rim taking into account the testing conditions dictated by a protocol conceived to get the approval for the certification of such a mechanical component. 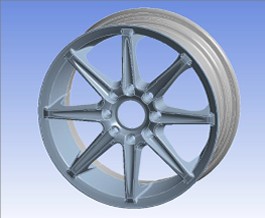 Using the baseline CAD of the model, the modifications to be computationally investigated for optimization purposes have been applied through a mesh morphing technique using RBF Morph ACT Extension. Through this tool the optimization of an automotive wheel rim aiming at achieving light weight and structural consistency has been accomplished.

Specifically, after the judgment of the numerical outputs obtained under the prescribed loading and constraint scenarios considered for the baseline FEM model, the RBF solutions driving the moulding of the component have been set to identify the optimal configuration representing the best trade-off between maximum stress present in the component, its mass as well as its structural behaviour in terms of inertial characteristics. A mass reduction of about 7% is achieved satisfying all the strength requirements imposed by the protocol.

Advanced radial basis functions morphing of RBF Morph has been used to re-shape an automotive wheel rim in order to reduce its weight preventing at the same time the structural failure of the component. The environment chosen to perform the study has been ANSYS Workbench with integrated the RBF Morph ACT Extension. 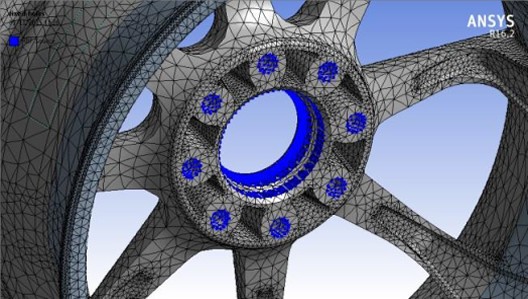 Loads scenarios have been set according to the TÜV standard prescribing how to apply boundary conditions on a wheel rim in a series of tests in order to be homologated. First of all, a structural analysis of the baseline configuration has been run to assess the starting point in terms of stresses acting on the component and, consequently, possibilities of improvement. Being the loads not symmetrical, the entire geometry has been studied. Preliminary analyses have showed that the structure was not exploited to its maximum considering that a reserve of fatigue life was left and a weight lightening would have been possible. The cross sections of the wheel rim spokes have been progressively reduced by means of morphing tool action, with a decreasing scaling factor and monitoring the resulting FI values. The shrinkage of the spokes has been stopped when the value of the highest FI reached 0.99. This last is the chosen optimal configuration for the wheel rim, i.e. the lightest possible before fatigue failure, with a 6.6% weight reduction on an already optimised geometry.

The integration of RBF Morph technology in ANSYS Mechanical has proven to provide the user with the possibility to manage complex models and perform shape optimization studies directly inside a familiar and efficient working environment in short time.