RBF Morph can speed up your design with several examples of internal and external flow. A specific example of usage of RBF Morph in motor sport will be given by Dallara with examples on the Indy Car IR5.

In this study, we have  parameterized a CFD model for complex shape change directly from the RBF-Morph solution, to pair it with ANSYS DesignXplorer, and to set up the automated exploration of the design space to deliver the optimal design shape.

Indy configuration of the IR5 formula car: It’s important to investigate the front wing deformation to:

Detailed materials description and constraints imposition for each physical component. Particular attention has been taken in order to correctly represent the carbon properties in terms of lamination and fibers orientation.

The modal analysis of the FEA model shows that the first 5 modes are significant (shape and frequency) to describe the deformation of the front wing assembly.

An iterative loop has been implemented to obtain the static aeroelastic equilibrium. The modal convergence is achieved after just 4!!

PERFORMANCE: The aeroelastic deformation produces a quite small displacement. The aerodynamic performance is not influenced in this front wing configuration.

STRUCTURAL SAFETY: The maximum displacement is complitely acceptable (design and rules check), according to the structural characteristics. 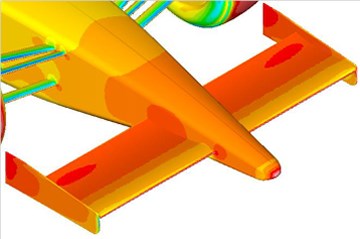