The present study is addressed to the improvement of the aerodynamic design of an industrial glider flying at Mach 0.08.

Taurus glider, designed and manufactured by Pipistrel d.o.o. Ajdovščina Slovenia is a side-by-side two-seat self-launching ultra-light glider made out of composite materials. The wing is located in a vertical central position respect to the fuselage, whilst its longitudinal position is aft the maximum section, behind the cockpit, in a significant positive pressure gradient.

This configuration implies that, in the fuselage junction region, the wing suffers an extra increase of flow velocity close to the leading edge and a significant adverse pressure gradient in the trailing edge region that cause a leading edge separation at high angles of attach (AoA). The problem is particularly felt when lowering the Reynolds number (increasing the altitude) effecting a falling of the overall aircraft aerodynamic efficiency in manoeuvring.

The occurrence of separated flow conditions was demonstrated experimentally by performing flight tests. The flow attachment on glider’s shape was monitored by means of small rectangular pieces of adhesive tape – tufts. Unordered direction of tufts at the wing/fuselage fairing clearly indicates a detached flow that is propagating according to a delta shape in the streamwise direction. 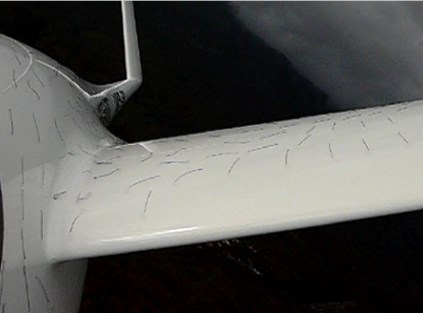 Adopting a numerical optimization approach affordable in the case that HPC resources are limited, the separation was significantly reduced updating the local geometry of fuselage and fairing maintaining the wing airfoil unchanged. Shape variations were applied to the glider’s baseline configuration through a mesh morphing technique founded on the mathematical framework of radial basis functions (RBFs).

The computational outputs were obtained employing a combined use of ANSYS® DesignXplorer™, ANSYS® Fluent® and RBF Morph™ software working in the ANSYS® Workbench™ environment. The k-ω SST turbulence model was used with two levels of structured hexahedral meshes, both generated using ANSYS® ICEM CFD™: a coarse grid to be used applying wall functions and a fine version with cells clustering aimed to solve the boundary layer up to the wall. 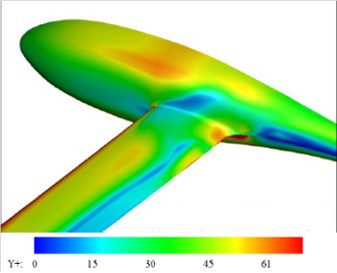 The coarse mesh allows to quickly tune and set-up the overall workflow keeping the high fidelity one for the final optimisation run.

Two shape modifiers were set up by means of RBF Morph™ to drive shape morphing guaranteeing, at the same time, the fulfilment of the manufacturing constraints.

Once the RBF solutions were computed and made available, a DoE optimization calculation was set up using ANSYS® DesignXplorer™ and, after performing CFD runs through ANSYS® Fluent®, the potential optimal candidates maximizing the aerodynamic efficiency were identified by means of the response surface approach.

A relevant aerodynamic efficiency improvement was finally gained moulding the glider’s geometry according to the selected optimal design point.

Such an optimization study is part of an explorative set of analyses that focused on better addressing the numerical strategies to be employed in the development of the EU FP7 Project RBF4AERO.