In the analysis and design of racing competition cars, numerical tools allow to investigate a wide range of solutions in short time and with high confidence in results. The great available computational power permits to combine simulation software so that different physics involved can be tackled at the same time. An important class of multi-physics simulations for motor sport addresses the fluid-structure interactions happening between the aerodynamic components of the car and the surrounding flow: this interaction can induce structural deformations and vibrations which, in turn, can influence the surrounding fluxes.

The study was set up adopting high fidelity CAE models: a 400k shell elements FEM represents the full front wing assembly including the mounting frame, a 240M cells CFD represents the full car immersed in a box shaped wind tunnel. FEM extracted structural modal shapes are mapped onto the CFD mesh adopting Radial Basis Functions (RBF) mesh morphing so that the surfaces of the CFD model can be deformed according to retained modes. Such deformation is then propagated so that the volume mesh is adapted accordingly.

The car equipped with the improved part proved to perform on the track without previously detected instabilities. 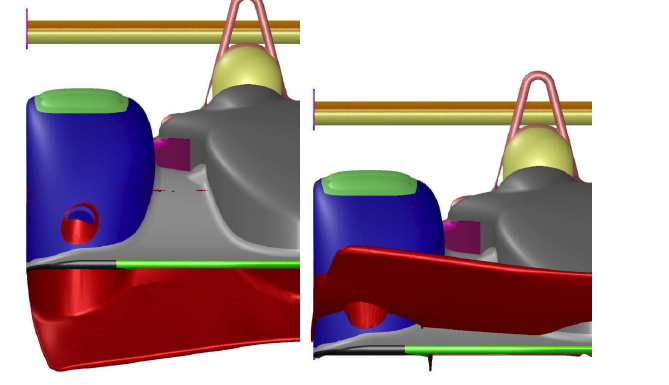