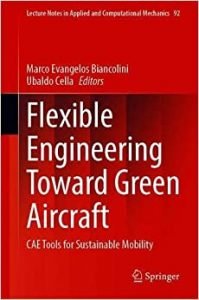 At the conclusion of the EU-funded RBF4AERO and RIBES projects, the University of Rome “Tor Vergata” decided to organize a one-day workshop aimed to present the results of the two programs and to highlight the status of researches in the aerospace field focusing on the recent achievements in analysis and design methodologies adopted in the aircraft design process. December 14, 2017, the event Flexible Engineering Toward Green Aircraft organized by the editors of the present book was hosted by the university in Rome

The success of the workshop suggested to collect relevant contributions to the topics covered by the event and to propose to Springer the publication of a book titled Flexible Engineering Toward Green Aircraft: CAE Tools for Sustainable Mobility.

It provides an overview of topics such as shape optimization, robust design and aeroelasticity, focusing on fluid-structure numerical methodologies to address static and dynamic aeroelastic problems. It demonstrates that the capability to evaluate the interaction between aerodynamics, inertia and elastic forces is important to avoid drag penalties, control system efficiency loss and generation of potentially dangerous phenomena, such as divergence, control reversal and flutter.

The book is opened by Paolo Colombo, Global Industry Director of Aerospace and Defense at ANSYS Inc., who provides an overview about “Designing the Next Generation of Aircraft with Simulation” focusing on its unexpressed potential and outlining the future from the perspective of a leading engineering software provider.