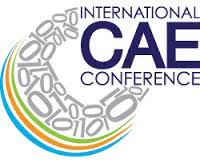 RBF Morph will join the 31st International CAE Conference that will be taking place in October on 19th and 20th in Pacengo del Garda (Verona). Specifically two works will be presented.

The first one is titled “Structural optimization of an automotive wheel rim through an RBF mesh morphing technique” and will be held in the TRANSPORTATION session.

Such a study was performed in collaboration with D’Appolonia SpA using the ACT module for ANSYS Mechanical.

Furthermore, a second study entitled “Icing simulation through the RBF4AERO Benchmark Technology” will be given in the AEROSPACE AND DEFENCE session.

This latter is work was carried out in cooperation with the University of Rome Tor Vergata that belongs to the consortium of the FP7 EU project RBF4AERO. Hope to meet you CAE Conference!

The aim of the study is to optimize an aluminum rim taking into account the testing conditions dictated by a protocol conceived to get the approval for the certification of such a mechanical component.

Specifically, after the judgement of the numerical outputs obtained under the prescribed loading and constraint scenarios considered for the baseline FEM model, the RBF solutions driving the molding of the component have been set to identify the optimal configuration representing the best trade-off between maximum stress present in the component, its mass as well as its structural behavior in terms of inertial characteristics.

A mass reduction of about 8% is achieved satisfying all the strength requirements imposed by the protocol.