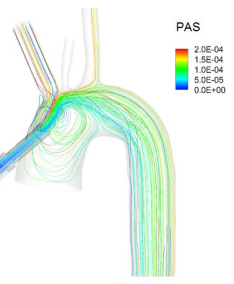 The article the dealing with a virtual test bench for hemodynamic evaluation of aortic cannulation in cardiopulmonary bypass based on RBF mesh morphing and presented at 11th World Congress on Computational Mechanics that took place in Barcelona (Spain) in July from 20th to 25th 2014 is now downloadable in the reserver area of by means of the link.

In particular, RBF Morph was used to explore clinical use parameters that influence surgery performances.

Cardiopulmonary bypass (CPB) is a common practice in cardiac surgery. In this technique,venous blood is directed from the venous system to a heart-lung machine and then returned to the aorta through an inserted arterial cannula.

Related to the altered flow conditions induced by the arterial cannula, a second major complication is an increased risk of thromboembolic events, caused by the mechanical activation of platelet aggregation pathways, induced by the highly disturbed flow patterns.

Thus, the study of the effect of cannulation and its influence on the described mechanisms is of high clinical relevance and could allow the optimization of therapeutic performances.

Currently, there is very little guidance for the surgeons regarding optimal clinical use parameters. In this study, we implemented a computational fluid dynamics (CFD) model to numerically assess the fluid dynamics generated by the arterial cannula.

Mesh morphing techniques based on radial basis functions (RBF) are used to explore clinical use parameters that influence surgery performances. As an example of the parameters that can be analysed with the developed benchmark, the cannula insertion angle is considered and its effect on flow dynamics-related thromboembolic risk and supra-aortic arteries perfusion is evaluated.