RBF Morph, the company providing fast mesh morphing tools, announces that a new version of RBF Morph App for ANSYS Workbench is going to be released. “Performances matter.” says Marco E. Biancolini, owner of RBF Morph, about it “A comparison between the new RBF solver and the past one registered a speed up that is more than 8 times. Our company is continuously committed in the development of fast algorithms. Our users choose RBF Morph technology for mesh morphing because it allows to quickly reshape and parametrise directly the mesh without the need of updating the CAD and generating a new one”. 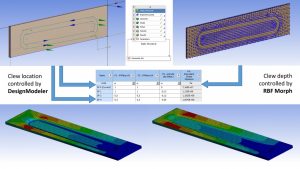 Exploiting the features of ACT technology, the RBF Morph App is deeply integrated in Mechanical sharing its look & feel and interaction logic including the usual scoping tools for geometrical and mesh elements selections.

New version comes with advanced tools for CAD targets (point to point, multiple edges to multiple edges, projection on multiple surfaces), a detailed diagnostic of the status of the RBF solver during the morphing process and a new faster RBF solver.

A full shape parametric CAE model is obtained and the shape parameters are exposed to Workbench ready to be steered by the optimizer of choice.