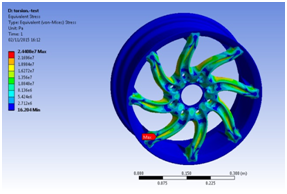 The article published in the proceedings of the 31st International CAE Conference, that took place in October 2015 from 19th to 20th in Lazise (Italy), can now be downloaded in the Presentations and Proceedings 2015.

Such a paper describes the numerical optimization performed through the RBF Morph ACT Extension to re-shape an automotive wheel rim with the aim to reduce its weight preventing at the same time the structural failure of the component.

The aim of the study is to optimize an aluminium wheel rim taking into account the testing conditions dictated by a protocol conceived to get the approval for the certification of such a mechanical component.

Specifically, after the judgement of the numerical outputs obtained under the prescribed loading and constraint scenarios considered for the baseline FEM model, the RBF solutions driving the moulding of the component have been set to identify the optimal configuration representing the best trade-off between maximum stress present in the component, its mass as well as its structural behaviour in terms of inertial characteristics.

A mass reduction of about 7% is achieved satisfying all the strength requirements imposed by the protocol.