This study has been conducted within a Research partnership, active since 2009, between Piaggio Aero Industries and University of Rome Tor Vergata. The collaboration was addressed to the solution of the aeroelastic problem, using the RBF Morph mesh morphing software, and recently extended to shape optimization methods. 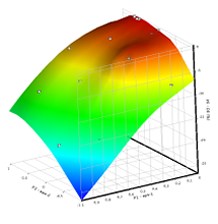 A wind tunnel model of a business class aircraft in complete configuration, tested by Piaggio in the ONERA S2MA transonic facility, was used as baseline geometry. Sweep angles of two wing regions, in which the leading edges was kept straight and the wing reference area maintained constant, were selected as design variables. The relative movement between root section, kink section and wing tip was imposed using a two step morphing strategy. RBF Morph was first applied to the wing surface reshape (step 1) and then to the surrounding volume extending the morphing to a mesh sub domain delimited by a user defined bounding box (step 2). The quality of the mesh was verified in the full range of variation of both modifiers.

The baseline geometry was analyzed by CFD and parameterized using custom parameters to update the shape. The new geometries were analyzed using the flow solution of baseline geometry as starting solution. Such strategy permitted to significantly reduce the time to convergence of the new evaluations (500 iteration for a restarted solution against 1500 starting from scratch).

Lift and Drag coefficients were exported as output parameters (CD, CL) and used by the Workbench to derive the aerodynamic efficiency as objective function of the design problem. MOGA algorithm was applied and Kriging response surface (optimal space filling points + validated optimal candidates) estimated. A wide range of efficiency variation (25%) was observed in the design space but, as expected, very slight improvements of the baseline solution (less than 1%) was achieved. On the other hand the wing was already optimized in the aircraft design stage, a valuable performance improvement would then have been surprising. The objective of the work was, in fact, to test the robustness and the performance of the design method. The baseline solution is located near the maximum of the optimal area where the response surface exhibits a flat behavior confirming the quality of the starting design. 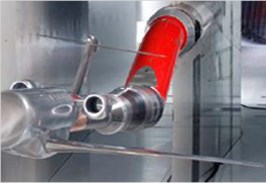 The optimization cycle was completed in a couple of weeks. The estimation of the response surface made it possible to evaluate the robustness of the various design candidates. The most robust designs are those in regions of the response surface with the least slope. As expected a very slight performance improvement (less than 1%) was obtained. As mentioned the aircraft wing of the test case was already the result of an accurate aerodynamic design process. However, a wide design parameter space was investigated and the method showed to be robust and to have very interesting potentialities. It demonstrated to be a powerful tool able to improve the engineers design capabilities ready to be integrated in an high performance industrial design process.