A CFD-based wing sail optimisation method coupled to a VPP

An aerodynamic optimisation procedure for an AC72 wing sail was developed. It includes a RANS solver and a VPP.

The boat performance is maximised identifying the optimum values of a set of parameters defying the wing trim. In particular, a four degrees of freedom equilibrium equation system is solved for a prescribed wing geometry, providing the sail forces by RANS computations. An optimisation algorithm guides the shape modifiers in order to drive the search by identifying the optimum wing trim for prescribed true wind conditions. The objective is to maximise the boat speed.

The effectiveness of the developed code was demonstrated showing a two variable single objective optimisation. The variables were the trim angles of the two wing elements, and the angles of attack were optimised at two different true wind speeds. While the results could not be validated due to a lack ofexperimental data, the computed maximum boat speed and optimum wing trim had reasonable values compared to what has been observed in full scale. The gap between the main element of the wing and the flap was set constant to 2% of the chord. This value was found to be optimum within a preliminary parametric 2D analysis. This analysis showed that a difference of a few percent can lead to either attached flow on both the wing elements or to significant trailing edge separation on the main element and stall of the flap. Therefore future works should optimise the gap between the elements taking into account the 3D effects. Separation was also found controllable using a flexible trailing edge of the main element, and the optimum deflection angle was found equal to approximately half of the flap deflection angle. 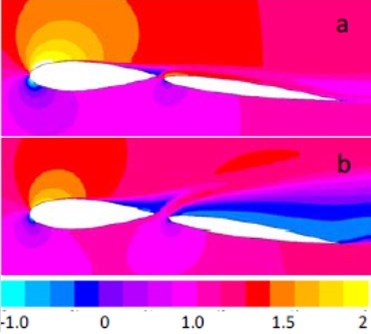